Are we facing a “serious shortage of properties for keen buyers”?

There are many more buyers than sellers intending to be active in the New Zealand property market in the next 12 months. This was a major finding in research released on 31 May by realestate.co.nz as part of their May 2018 NZ Property Report. NZ Property Report May 2018. Commissioned by realestate.co.nz, the Horizon Research survey* examined buyer and seller intention to participate in the property market in the near future. The research results show that 6.4% of the adults 18 years or over surveyed are definitely looking to buy in the next 12 months, but only 2.8% of people stated they are definitely looking to sell in that same period.  “Even taking into account new builds which are underway and not included in these numbers, there will be an increasingly serious shortage of properties for keen buyers” says realestate.co.nz spokesperson Vanessa Taylor.

However Alister Helm**, of Properazzi, interprets the data slightly differently in his article released June 6 – “Wow – 6.4% of adults definitely going to buy; but only 2.8% going to sell!  As stated that would seem to be a “serious shortage of properties for keen buyers”.

Alister continues – “The danger as ever with statistics is that seeing one set of data in isolation can lead to misinterpretation. Sure, in this survey 6.4% of adults are going to buy vs 2.8% are going to sell. On the face of it, it certainly seems serious and due cause for alarm, especially when we are constantly being told in the media (and by politicians) that we need to build more houses to solve a housing crisis. But hold on a moment. Step back and ask what is the context of this research data. We need to ask how have results changed over the past year or the past 5 years? Are we seeing a growing trend or a declining trend? After all one data point does not tell us everything.

“The beauty of the internet is that you don’t have to hound people to get them to provide the data, the data is accessible. Horizon Research has been undertaking a Housing Supply and Demand Survey since 2010 on a fairly frequent basis and here are the results.” 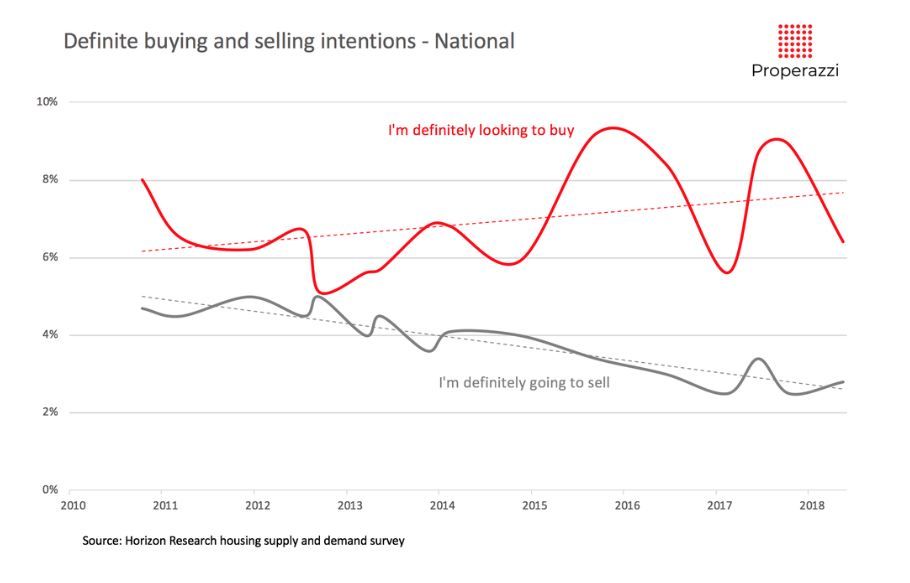 “So it would appear that the data for May whilst perceived to be high was actually down on the previous report from October last year, when the level of definite buyer activity was 9.8% and seller intention was just 2.5%. That’s 1 in 10 adults saying that they were going to definitely buy. At the same time just 1 in 40 adults said they were going to definitely sell! How did I possibly miss that piece of news?

“There is no denying that the chart very clearly shows an ever growing divergence between buyer intent and seller intent, however the question has to be asked. If as the media release states … will there be an “increasingly serious shortage of properties for keen buyers”?”

Alister continues the article by analysing the buyer and seller data in the research and comes to the conclusion  – “Existing homeowners go through a process. A process that ends up with the purchase of one house and the sale of another, however this process from a psychological perspective does not begin with a rational intent to sell. It starts with an intention to buy.

“Selling a property is a means to an end; the end being the next home. It is a functional process, not an emotional decision process – the emotions lie in the expectation around the next home. So when asked in a survey the intention to sell, the typical adult probably under-reports, largely due to the anxiety and expectation surrounding the process of selling. That is my opinion.

“So I don’t support the view that we are really facing a “serious shortage of properties for keen buyers”, we are simply seeing the normal property market at work.”

Alister’s full article can be found here  Are we really facing a shortage of properties for keen buyers?

** Alister Helm was CEO of realestate.co.nz from 2006-2012, then joined Trade Me Property’s team as Head of Product in 2014. His Properazzi real estate analysis website has been running since 2012, and he is now an active real estate salesperson in Devonport, Auckland.